Health care leaders have the uniquechallenge of improving the health and well-being of the individuals, neighborhoods, and communities they serve while simultaneously working to minimize negative and health-depreciating impacts on the environment.

We spoke to Chip Amoe, who became Henry Ford Health’s first director of sustainability in 2018, about the challenges and successes he faces as he leads HFH to become more ‘green.’

The health system has more than 33,000 employees and nearly 6,000 physicians and researchers.

Amoe took on the role with a conviction that HFH can work to lead by example and help influence the sustainability policies and actions of government officials and other businesses in the state and region.

His original initiatives focused on reducing plastic and Styrofoam waste, exploring ways to reduce greenhouse gas emissions through energy reduction, and standardizing efforts across the system.

Our overall goal here is to reduce scope 1 & 2 emissions by 50% by 2030. To do that we need to reduce emissions from purchased energy. We plan to start purchasing this renewable energy in 2023, the earliest it will be available, and ramp it up over time.

To that end, initially, 10% (approximately 19,100 mega-watt hours) of Henry Ford’s total electricity purchased from DTE will come from Michigan-made renewable energy, increasing incrementally to 100% by 2029.

Henry Ford’s clean energy commitment with DTE will begin in late 2023. The organization states its initial purchase will reduce greenhouse gas emissions by roughly 13,536 metric tons, the equivalent of removing 2,944 passenger vehicles from the road each year.

In terms of setting longer-term goals, Amoe said, “There are several national organizations that have developed green healthcare standards  for healthcare systems. Taking those into consideration, we also felt it was important to turnto our internal priorities that align directly with our mission of improving the health of the communities we serve and that link health and sustainability.”

The following five goals are derived from that exercise:

“Data collecting is a huge challenge,” he said. “When I came on board I assumed the information was being collected and housed so that we could track it. But I quickly learned that wasn’t the case.We’re a large, complex system and there are multiple data sources maintained by multiple departments so you inevitably come to understand thereare gaps in the information. And you can’t move what you can’t measure. We are working to streamline our data collection efforts and it’s a long process.”

The second challenge is the state of the U.S. recycling market.

Just as I started my role in 2018, China announced that it would no longer be accepting recycled material from the U.S. This has been a big hit to the U.S. recycling market and made it much more challenging. Combine that with low landfill tipping fees in the state and the lack of recycling infrastructure in the region and that means recycling is often more expensive than throwing things away.

Despite the challenges, Amoe and the Henry Ford team have implemented several initiatives in the past four years, including:

They have also partnered with Friends of the Rouge to create raingardens at their new Plymouth medical center and south campus to divert stormwater and offer green space.

When asked what the health care industry could improve on to forward sustainability efforts, Amoe said “it’s important to come together as an industry around common standards, and work with outside vendors as an industry to request and gather data in a common format so that vendors know how they can help us meet our shared goals of improving the health of our communities

Additionally, the Michigan Health and Hospital Association Green Health Care Committee – which Amoe chairs – recently launched an MHA-approved Health Care Sustainability Road Map to give health systems a place to start when it comes to sustainability. “We are working to develop common standards and to provide resources to hospitals in Michigan and beyond.”

In the end, Amoe says, “We hope to demonstrate to our staff, patients, vendors, and surrounding businesses the connection between health and sustainability, and further, to facilitate positive choices that impact the overall health of our community.” 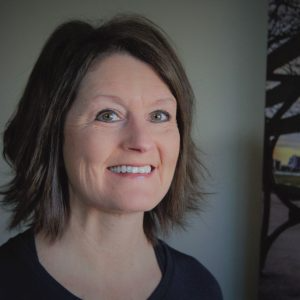